One of the things you may not know about me is that I’m a bit of a musical theater nerd.  What this really means is I tend to be a singing snob.  Yeah…I’m one of those people.  It doesn’t mean I think I can do it better than other singers, I just get annoyed when singing isn’t done correctly. (Note to teachers of young singers – STOP MAKING THEM SING OUT OF THEIR NOSES!!!!!  Thank you.)

So when a live broadcast of The Sound of Music was announced with Carrie Underwood, I wasn’t terribly excited.  Nothing against her voice – I’m just not a country fan and I think sometimes she can be a little wooden in her performance.  And I love Julie Andrews.  Therefore, I chose not to watch.

That doesn’t mean I didn’t read a bunch of the comments made on social media on the interwebs.  Seriously, y’all got creative.  And some of you were funny.  And a little mean. 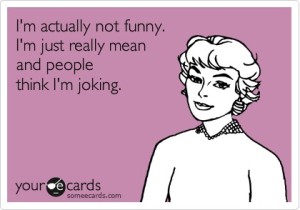 I was listening to Seth Speaks on my satellite radio (On Broadway channel – enjoy!) and Laura Benanti was a guest (she played the Baroness on the NBC broadcast, and starred as Maria in the Broadway revival…and she is amazing).  She was sharing some backstage stories and such, and Seth asked her what she thought about the comments made against Carrie.  And Laura threw down on the haters.

“Snark,” Laura says, “is the new cool.”   She pointed out that here was a person with the courage to try something she’d never done before…live…in front of 18 million people.  Instead of applauding her for it, and celebrating the fact that a major network took a chance to bring a new, younger audience to Broadway and music, the Twitter-verse used it as a chance to show off how clever it is.

No snark?
This stuck with me.  I love snark.  I enjoy the heck out of reading it, and I tend to engage heavily in the dishing out of said snark, too.  But Laura has a point – snark can get in the way of what you’re really trying to accomplish.  It can shut down people’s willingness to take a chance.  It can break down the feeling of “team”.  A lot of people who give snark can’t take it, so then you get a whiny snarker.  And while snark might be funny or make you look clever, is it adding anything of value to fix the perceived issue?  In short, snark can be extremely damaging.

What to do?
I’m not going to advocate going snark-free.  A little snark is like good satire – it points out that the emperor has no clothes and uses humor and shock to heighten awareness about a situation.  Matt Charney’s Snark Attack blog  is great!  So is Television Without Pity (spare the snark, spoil the network).  That snark IS cool.  And funny.  And thought-provoking. And change driving.

So if you consider yourself a snark aficionado (and who doesn’t, amiright?), use the next 30 days to pay attention to how and when you use it.  If your intent is pure and you’re working towards a greater good, snark away.  And a little snarkiness amongst friends can be fun!  But if you’re employing snark to put someone else down because it makes you feel better about yourself and you think it makes you look clever, stop it. You’re just being an asshole.