But this year, the stars aligned I get to go to the conference. And even better, I get to work with the blogger group. In return for my conference pass, I am asked to attend the sessions as an end-user, sharing what I see and my experiences as an HR practitioner in the wild. It’s like HR Tech Nerd Christmas.

Looking through the agenda, I can honestly say I am overwhelmed by the amazing options available. I’ll definitely be starting my conference on Tuesday with the Women in HR Technology track.  From there, I’m trying to decide between bouncing around a number of different tracks, or just planting myself in every single AI session led by John Sumser, who is doing some amazing research and analysis in this area.

As an HR leader about to embark on the quest of implementing a new HCM, I’m really going to learn more about the experience that others have had as they go down this path – what did they learn? what did they wish they had known before they got started? what are the questions I should be asking the vendors along the way? who in the business was their biggest ally? I think that sometimes the HR experience in HR tech gets left out, so my goal is to share my perspective and the perspectives of other HR practitioners who are on various places on the tech savvy spectrum.

I’ll be live tweeting sessions, so follow me on Twitter at @mfaulkner43 and follow the #HRTechConf hashtag all week, September 11-14. If you’re on the fence about going, there’s help available. And use the promo code SURVIVE18 for $300 off your registration (who doesn’t love a sale?).

It’s not every day you get an opportunity to attend a conference that speaks to a multitude of your interests. I can’t wait to learn from the sessions and the speakers. And I can’t wait to share what I learned with anyone who wants to read about it.

What’s that? ANOTHER movie reference in a blog post? Hell yes. Buckle up, buttercup. Let’s do this.

It’s no secret that I love science fiction (and science fantasy, where I firmly place Star Wars, but that’s a discussion for another time). I started reading Ray Bradbury and Harlan Ellison at a very young age. Which explains a lot, really. What I appreciate about the genre is that it is such a mirror of who we are as a society – and who we want to be. Some sci-fi is post-apocalyptic and depressing, some is unnaturally cheerful and optimistic. (You can probably guess what kind I tend to watch.) All of it acts as a social commentary for the time in which it was made.

One story I experienced first as a movie and then as a book is Ender’s Game. Regardless of what you think of the book’s author, the story and world building is brilliant and engaging. Years ago, Earth was invaded by an alien species and barely survived. Since then, society has been obsessed with preparing for the next attack, training children to be the leaders of the battle because their brains can process the multitude of data faster.

Ender, so-called because he is a third child in a society that limits most families to two, is unique among his peers. He is the perfect combination of aggression and compassion, believing that the best way to defeat his enemy is to love them, because only then do you understand them. When confronted by bullies at his school, he gravely injures the toughest boy – an apparent over-reaction to the situation. When questioned why later, he replies that he wasn’t fighting to win that battle – he was fighting to win all future battles, too. (Seriously, go watch the movie and read the book – so good.) 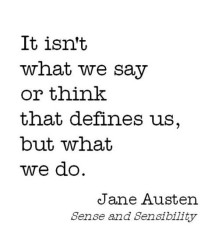 One line in particular has stuck with me. [SPOILERS AHEAD] Near the end of the story, Ender and his unit have been undergoing simulation after simulation to defeat the Formics (insect-like aliens). In the final simulation, they risk nearly everything to defeat the entire race of Formics. Ender sacrifices thousands of (he thinks) simulated lives to achieve victory. Following the simulation, the adults cheer…it turns out, the simulation was the real battle. Colonel Graff (played by Harrison Ford) explains they didn’t tell Ender because they didn’t want him to hesitate…that they needed him to do what was necessary. Graff insists Ender will be remembered a hero. “We won,” Graff proclaims. “That’s all the matters.” Ender fires back, “No. The way we win matters.”

This line says so much. It embodies so much of our humanity…or lack of it.

How many times have leaders claimed winning is the only option? How many organizations sacrifice values, integrity, dignity because they tell themselves the ends justify the means? Win at all costs. No holds barred. You have to play the game to win the game.

How many times do people regret that approach? In the long term, I hope it’s all of them. Because you give up something vital when you tell yourself that it doesn’t matter how you won. In the short term, it might seem like the smart play, but ultimately, history judges us all. It exposes the lies we tell ourselves and lays bare our mistakes.

Right now, American society is at a crossroads. We have an administration that values “winning” and loyalty over all else. We have a majority party in Congress that is willing to “win” no matter what the cost. We have organizations that are choosing to align themselves with a president who has been accused of sexual assault, and then turn around and speak about the dangers of #metoo. We live in a world where the number of  impressions and Twitter followers appear to be more important than values and critical thinking.

I’d like to believe we’ll right this ship; that we’ll realize that attention isn’t the same as regard. That small “victories” are meaningless if we lose the larger battle. That sacrificing what we believe for the sake of a photo op means more than a slight PR hit. The decisions we make moving forward as leaders – as human beings – say more about us than short term gains. Are we willing to admit that sometimes the right thing to do IS the hard thing to do? Do we have the courage to turn down what looks good in favor of what IS good? Are we willing to speak up when our leaders can’t? Or won’t?

THE WAY WE WIN MATTERS.