As a diehard fan of the now gone What Not To Wear, I fully accept the power of clothing to impact the way a person is perceived, but more importantly…how a person feels.

We’ve all had a moment where we put on a new pair of pants or a kickass blazer and thought, “I will OWN this day. Boom.”

We’ve all had that day where we put something on that we’re not super excited about and then spend the rest of the day fussy about how it fits, how it looks, how it feels.

And for some of us, we have an article of clothing that we absolutely love that’s slightly different from the mainstream – it could be shoes, it could be a button-down shirt, it could be socks, etc. Whatever it is, it is somehow magical and we love it. And we don’t really care if you love it, but we kind of hope you do because how could you not? IT’S AMAZING. 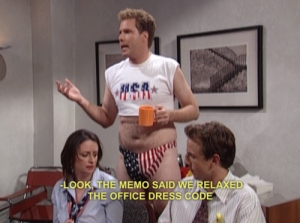 Then we run into coworkers who somehow feel like it’s their job to make comments about what you’re wearing. And those coworkers may think they’re being funny…but they’re not. They make you second guess what you look like and now you never feel like wearing that awesome tie again. Because now you’re that “tie guy.”

Look, I get that we all have different tastes. We all grew up with different backgrounds and socioeconomic levels – this impacts the way we dress and what we think looks fabulous. Shouldn’t we be celebrating this instead of judging it?

Here’s a rule of thumb: NEVER comment on something someone is wearing unless it’s to compliment them. Here are some examples of what that might sound like:

“That color looks great on you!”
“I like your tie.”
“I want to steal your shoes, they’re so cute.” (That last one might just be something I tend to say…)

See? Not once did someone make a joke about the color, print, cut, or otherwise about what someone was wearing.

Do people sometimes show up in the office looking horrific in your eyes? OF COURSE THEY DO. Remember, we all have different tastes – one person’s treasure is another person’s nightmare. I, for one, don’t get shoulder pads. Then again, I have the shoulders of a football player and have never needed them. (The early 90s were a tough time for me.) But I don’t comment on it – why ruin someone’s happiness about how they look?

Unless someone’s dress is unsafe, unallowed, or impacting their ability to be successful – don’t worry about it. Compliment them, or just shut the hell up.

The world won’t end because someone wore white socks with black shoes.