[Note to readers: This isn’t a “leadership” post, per se. I mean, leaders should read it from the perspective of leading others, but really, it’s a post about people.]

We’ve been rewatching From the Earth to the Moon in spurts. My husband and I are unabashed space race nerds – we watch all the documentaries, we love The Right Stuff, and I swear, I would have tried to be an astronaut if it were for the fact that the mere idea of weightlessness makes me want to barf. (Seriously…I can’t even read in a car. It’s a real pain.)

When I watch these shows, I’m struck by how freaking AMAZING it is that human beings did this. I mean…we sent people TO THE MOON. And they came back! In 1969! That’s just crazy. What’s even more amazing is all the steps that had to go right for us to be able to get to that moment with Neil Armstrong and Buzz Aldrin. Someone had to think through all the little steps it would take to launch a rocket safely, then put a person in it, then put two people in it, then dock in space, then design a LEM, then design the space suits, etc. It’s mind-blowing…and nevermind that they did this in only 8 years. EIGHT!

The moment humans walked on the surface of the moon was truly a uniting moment for our species. Footage from around the world showed it didn’t matter what country you were from, or what you believed in – people recognized the sheer magnitude of what we had been able to accomplish. Not only did it validate all that we had worked for up to that moment; it gave us hope for the potential of all that we could achieve. 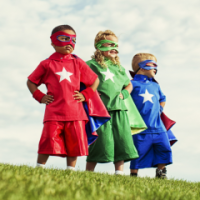 I bring this up because we need to be reminded of the potential of who we are. We are living in a time of unimaginable connectedness. On the one hand, it gives us the opportunity to connect with and learn from people all over the world. On the other hand, it means people can spew forth any thought that comes into their heads and put it on the internet.  So as you can see, we end up having to take the good with the bad. Unfortunately, the bad is so. damn. loud.

So let’s take this opportunity to remember – we don’t inherently suck as a species. We create so many things for the benefit of others. We can come together as a society and revel in our potential. (I mean, are you watching the Olympics? The refugee team – inspiring!) For every terrible story of someone taking advantage of people, of violence, of terror, there are more stories of heroism, of charity, of bravery…of love.

As you go about your life in the coming weeks, help those around you find the good potential inherent in what we do. Encourage people to seek out stories of triumph, not anger. Keep your mind open to the possible.

How do you want to complete that sentence?

This is beyond religion or creed or nation. We would not be here if humanity were inherently evil. We’d have eaten ourselves alive long ago.

So when you spot violence, or bigotry, or intolerance or fear or just garden-variety misogyny, hatred or ignorance, just look it in the eye and think, ‘The good outnumber you, and we always will.’