We’re all difficult to someone

On Monday’s #FailChat (on Twitter every Monday, 11am MT/1pm ET – join us!), we were discussing the challenge of managing difficult people (down, across and up) and examining our failures with it. Laurie Ruettimann made the comment that “When managing difficult people, assume you are also difficult. Helps a lot to be humble.” And she’s absolutely right. And because I have a pathological need to weigh in on everything, I responded with:

We are all difficult to someone. #failchat

The comment got some likes and a couple of “yeps” and we moved on with the conversation.

I’m still stuck on my comment, because it’s true. No matter how charming we think we are, or how many people blow sunshine up our butts, to someone out there we are an archenemy. We are the Lex Luthor to their Superman. We are the Emperor to their Luke Skywalker. We are the Lucille Bluthe to their Michael. 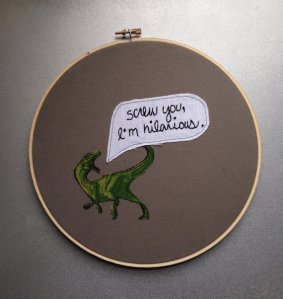 It’s really hard to accept that.

After all, we work hard to build relationships. A lot of us try to be kind (or at least, not actively toxic), and we attempt to get through our day productively and with limited drama.

And yet, there are people out there who hate us.

“But,” you might say, “how can you possibly know that? Everyone likes me.”

Here’s the test: If you’ve ever had to say “no” to someone at work, you were being difficult to them.

Maybe not all the time and they probably got over it (we hope), but right then and there – you were difficult. You didn’t let them do something they wanted to do. In fact, you probably had a REALLY good reason to not let them do it. But still – difficult.

Think about it – how did you react the last time someone told you that you couldn’t do something…especially if it was a super cool idea! Did you think ill of that person? Did you accuse them of saying no out of spite. Did you get a teensy bit grumpy? Well, other people are thinking the exact same thing about you.

Don’t take it personally – we’re all difficult people. The best way to deal with it is to remember that the other person is coming from a different perspective. A couple of tips:

“Difficult” is not a title. It’s not a trophy. It’s an adjective – and a common one, at that. So the next time you’re tempted to call someone difficult, just remember – you are, too.

And it’s all going to be okay.

I never give in to the temptation to be difficult just for the sake of being difficult. That would be too ridiculous.    ~ Jacques Derrida

Posted by M Faulkner on November 1, 2016 in Uncategorized

5 responses to “We’re all difficult to someone”