Whether you want it or not, the title of ‘leader’ comes with more than more responsibility and more headaches. It also comes with a lot power – or at the very least, perceived power.

This perception may not come from your peers or from the power that be. It comes from your direct reports. In their world, you’re kind of a big deal. You can hire, fire, write up, praise, assign work – in short, make their lives great or miserable.

And you thought you were just some middle manager. 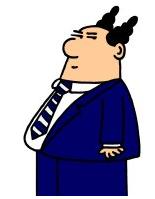 Now that you’re drunk with power and omnipotence, listen up.

Don’t be an asshole.

Sometimes it’s tempting to throw all that power around, particularly when you’ve had a bad day or just came out of a meeting where you were made to feel like a powerless employee. Just…don’t.

The thing is, your actions resonate loudly as a leader – and nowhere loudest than with your people.

In case you can’t possibly think of how you’re being an asshole, here are some ways asshole status might be achieved and how to avoid being “that manager.” (And notice, being an asshole doesn’t always mean being belligerent.):

It really boils down to this – remember that boss you once had that was a total asshole?

Don’t be that boss.

It’s as simple as that.

The key to being a good manager is keeping the people who hate you away from those who are still undecided.

One thought on “Leaders: Don’t be an asshole”