*Author’s Note: See what I did there?

There’s been a lot written about the challenges of being an introvert in a workplace that tends to value the behaviors of extroverts (see: Susan Cain). From open floor plan workspaces to “collaborative” work styles (e.g., we all sit in a room and stare at the same document until magic somehow occurs), to a belief that you must speak up in meetings or you’re not adding value – the preferred work style of introverts seems contrary to how corporate America seems to want to operate.

Despite this clash of styles, introverts are doing (mostly) okay. Exhausted and fussy at times, but mostly okay. We’ve been figuring out how to adapt to, and influence, our work environments to find a way to not only exist but thrive. We have also made headway in busting the myth that introverts are anti-social heathens who hate people. (That’s only a few of us.) Most introverts actually like people…but individually, and for short periods of time. Or through social media, because this means we can meter the intensity of our interaction to match our energy. Which is nice. Slowly but surely, we’ve started to change the perception that you have to be “outgoing” to be a good leader.

Then out of the blue…someone asks you to join their “group.”

Maybe it’s a bowling league. Maybe it’s a work committee. Or maybe someone tries to throw you into a generalized reference to a “them” when telling a story.

If you just read that and felt your heartbeat climb and your anxiety increase, chances are you are NOT a joiner.

It’s okay…I’m one of you. (Which really is kind of funny when you think about it, because now we’re a group but we don’t really WANT to be a group, and now we hate ourselves for being part of a group. Ugh.) 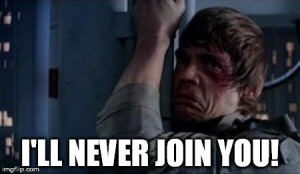 I know I started this post talking about introverts, but I want to point out that extroverts can be “anti-join,” too. I think anyone who hates being labeled or put into a box (particularly by others) aren’t really a “joiner.” Because introverts recharge individually, though, maybe they’re more prone to not wanting to join the club. (I have no research to support this, but it seems like research doesn’t change people’s minds anyway, so let’s pretend I told a really emotional story and got you on my side on this one.) (And yes, I’m aware of the irony that I just used research to prove that research won’t change your mind.)

Anyway, back to not wanting to be a joiner.

The problem with not being a joiner at work is that it somehow puts a mark on you. People who don’t want to join the club are often labelled as difficult, or maybe they “aren’t a culture fit,” which is often code for “not like us.”  Unfortunately, that mark can be tough to shake. Most people want so desperately to belong, so it’s hard to understand why someone wouldn’t want to belong in a very public, assimilated way.

And that’s where the challenge lies – never try to tell a non-joiner they HAVE to join. They will become stubborn, angry, and most likely will act directly opposite from what you’re trying to get the group to buy into. (At least that’s what my mom says I do. I think she’s lying out of spite.) They will feel put upon, and more importantly, they will feel even more like an outsider because you have put their otherness on display. And now they will never join you.

This is a damn shame, too, because here’s the thing – non-joiners actually do join things. They just tend to be much more selective and only join things that really speak to them – causes, activities, awesome snacks at club meetings. Don’t think of them as non-joiners. Think of them as the Discerning Joiner.

Discerning Joiners recognize they only have so much time and tolerance for meetings, get togethers, busy work, etc. They focus instead on things that they care about. And when they decide to join that “club,” the Discerning Joiner is a juggernaut. They will devote time, energy, attention, resources – anything they need to do in order to make sure their decision makes a difference for someone.

You WANT Discerning Joiners – you just don’t realize it yet. They tend to be the people who can make a real difference in society. They see something they don’t like and refuse to “join the club.” Instead, they make a conscious decision to evaluate the situation and do something to turn people’s heads and make them uncomfortable. It could be something as simple as sitting in someone else’s “spot” in a meeting to break up the monotony. Or it could be something as public as kneeling. Whatever action they take, though, they take intentionally. Don’t discount the power of that. Harness it. Encourage it. See what you can do to create an environment that allows that to happen positively.

And if you ARE a Discerning Joiner, stay strong. Stay principled. Don’t feel pressured to join the crowd. Join when it makes sense. Feel comfortable in being an individual, too.

USE YOUR POWERS FOR GOOD.

Even if you do it alone.

I am no bird; and no net ensnares me; I am a free human being with an independent will.
– Charlotte Bronte

6 thoughts on “Not a joiner? Join the club*”