I apologize to those of you out there looking for a return to the leadership content I often post here. This post is fairly HR-centric…although there are definitely leadership underpinnings, because doesn’t everything have leadership underpinnings? That’s just a fancy way of saying I want to share some thoughts that may or may not pertain to you. Also, the title comes from a quote from Captain Jack Sparrow in the Pirates of the Caribbean: “The problem isn’t the problem. The problem is your attitude about the problem.”

So here we go.

The online HR community has been growing, which is a good thing. In the early days, there was a handful of HR pros out on social media, blogging, tweeting, doing their thing. That number has grown exponentially, resulting in a wider network for people to connect with others who are doing the same work and facing the same problems. There are more bloggers, more tweeters, more voices out in the universe sharing their thoughts. Not everyone agrees with everyone else, and I think that’s a good thing. Healthy conflict drives innovation. Let’s do it.

Then there was a hashtag.

When the #HRTribe hashtag first appeared, some people loved it, some people were indifferent, and some people were really bothered by it. In the early days, though, it wasn’t really talked about openly. It was sort of a “meh, whatever” situation. Hashtags come and go, no skin off anyone’s nose.

A little time goes by and some folks begin to voice their discomfort with the term. The reasons are varied – the idea of the need for any label at all is a bit off-putting; there’s an “us vs them” exclusionary mentality growing; the word “tribe” itself holds a specific meaning and is being misused in this context. Like I said…a lot of variety in those reasons.

For the record, I’m not a huge fan of the term. I’m hovering somewhere between uncomfortable with the word “tribe” and “why do you need a label” in my reaction to it. I’m not militant about it. I just don’t use the hashtag. Early on in the growth of it, I suggested that if people really wanted to make it “inclusive,” maybe they should stop tagging specific folks on Twitter because it was sending a different message than was intended. That seemed to be good. I moved on, once gain – not using the hashtag, but not getting all up in arms about it, either.

But then hrmemes (a satirical instagram/twitter account, by the way – sort of like The Onion) posted a fairly funny image about the #HRTribe stuff: 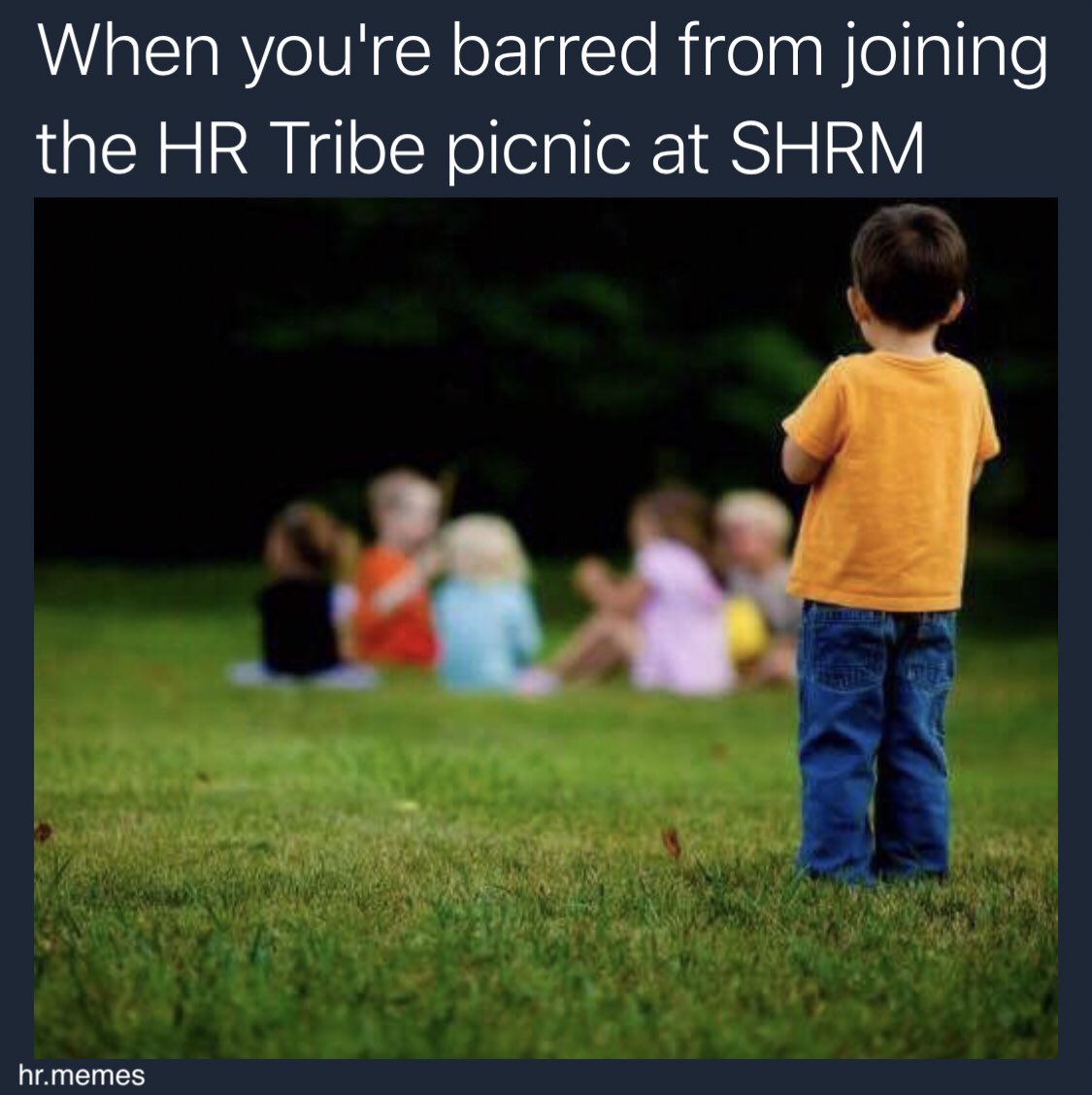 (Seriously – this is funny.)

The resulting discussion on Facebook was…enlightening. Suddenly, people who had stayed quiet about the issue started speaking out, and frankly, I was surprised at the number of folks who shared they had felt excluded because of the hashtag. That they felt like there was a wall put up between them and those who would use it. And that they were somewhat afraid to speak out because they didn’t want to “stir the pot.”

Look, I’m okay with people wanting to feel like they are part of a community. If a hashtag helps you feel connected, great. Godspeed. #blessed. Whatever.

But there are things I’ve seen and heard that bother me. And it’s primarily around how those who are pro-hashtag are responding to those who have said they don’t like it.

This is what I said on the Facebook discussion, and I stand by it:

Here’s an observation from seeing the discussion on HR Tribe usage across all social media platforms. I keep seeing those who like the term dismiss the experiences or views of those who dislike the term. When specific examples of exclusion are given, they tend to be dismissed because the intent isn’t exclusionary.

And yet, here we are, a bunch of HR professionals who are supposed to listen to people’s stories and meet them where they are in their experiences…telling them they’re wrong.

I’m bothered by that.

Regardless of how you feel about the use of the term, it’s the reaction of those around it that is starting to rub me wrong. Replace “I felt excluded” with “I felt harassed” and suddenly it takes on a different flavor, doesn’t it?

No…HR Tribe is NOT an earth-shattering thing that we should lose our collective shit over. But maybe the way we’re talking about it should be.

Notice the focus – it’s not on the hashtag. It’s on the way we are talking about the hashtag.

How people are talking about this reflects how they would handle any controversial topic in the workplace. We are supposed to be a group of people that employees can go to and share their concerns. If someone came to you and said, “Ted from Accounting is making me feel uncomfortable,” should the response be, “Oh, Ted doesn’t mean anything by it. He’s just a friendly guy. You just misunderstood what he was doing”? I would hope not. And PLEASE don’t come at me and argue that a meme isn’t the same as harassment – yeah, I know. But it’s not a giant leap in logic, either.

Frankly, I’m shocked at the amount of passion and emotion around this thing. Some people have really doubled-down on their viewpoint. It’s a freaking hashtag. Yet it apparently has triggered some discussions that need to happen.

To be clear, there have been a number of people who love the hashtag who have said, “I get what you’re saying. Thanks for sharing. I’m still going to use it, but I will be more aware of how it makes people feel.” I love that. There are people listening, reflecting, and then making a conscious choice for a specific reason. There are also a number of people who have reached out and said, “I am glad someone said it. The tribe thing has bothered me for a long time but I didn’t want to say anything.” I love that, too. It means people want to have the conversation.

If we are going to be a profession that claims we can be a safe space for employees to bring forward their #metoo moments, or anything else that breaks the law, then we need to prove it. As Dominique Rodgers said during a Twitter conversation: If a group of kind, educated professionals can’t have this slightly awkward conversation, our nation has no hope for the much bigger awkward conversations that need to happen. Please don’t retreat. We value all perspectives. Promise.

3 thoughts on “The “problem” is not the problem”